It's Not Just a Movie, T-Shirt #9: Star Wars on Rogue One Day 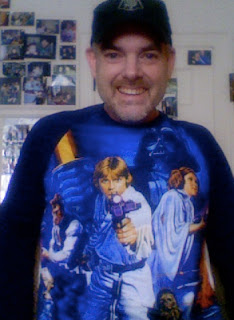 It’s not just a movie.

It’s my childhood.  It’s the magic of myth.  It’s playing with the figures. It’s spazzing when I got the Death Star for Christmas. It’s seeing Empire at The Flick in Westboro and not wanting to believe Vader was Luke’s father.  It’s quoting the lines with my family and friends. It’s jumping from one bed to another in the barn on PEI pretending your Luke jumping from one skiff to another. It’s watching the movies referenced in other places like Kevin Smith’s movies. It’s referencing the movies to people who don’t know what you’re talking about. It’s seeing 501st members at events. It’s seeing Return of the Jedi with my whole family.  It’s being 9 and having Princess Leia in her metal bikini confirm the unchosen fact that I am straight.   It’s knowing that Leia’s cell number was 2187.  It’s telling my Harry Potter-loving sister that Harry is the same myth story as Star Wars – orphan unwilling to be the hero is taken from home, given a magic object, taught by an old master, finds out part of him is bad, chooses good and takes on the ultimate evil. It’s feeling like a kid again when they rereleased the movies in 1997. It’s watching A New Hope with a special ed student who had never seen it and him saying “Hey, Luke hears voices just like I do!” after Obi-Wan’s spirit tells Luke to use The Force. It’s having three pie pieces in Star Wars Trivial Pursuit before some teams have taken their first turn.    It’s making my own Office Space Star Wars parody in response to Lucas saying he was changing the movies…again. It’s my nephew crying when I told him Darth Vader was Luke’s father and he thought I was lying.  It’s seeing an Episode II midnight showing with two of your best friends, Andy and Glen. It’s giving your Emperor figure to someone you hardly know, but not thinking twice about it because that person is a big fan. It’s waiting up to get Rogue One tickets.  It’s seeing Rogue One tonight with my brother, nephews, and cousin (who bought me this shirt as a thank you for getting Episode VII tickets last year).

More than anything, it’s sharing the Love with other people. May The Force be with you…always.
Posted by Dave McGrath at 11:58 AM No comments: 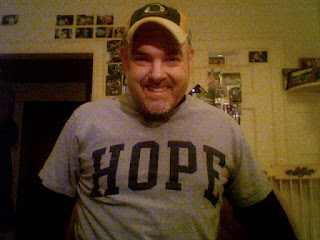 I bought this one from the Hope College online bookstore because I thought it would be a good one to wear to work at Hope Lodge.

Last March, I went to visit my friend Christina in LA, and was lucky enough to get tickets to see a Jimmy Kimmel taping.

A few days before I got there, they announced that President Obama was going to be a guest the night we had tickets.

Being the dork that I am, I wore this t-shirt to the taping, on the off-chance that the President would see it. Christina and I were seated in the second row, and had a great view of Jimmy's desk

When Obama got up to leave, I stood up to clap, and because the couple in front of me didn't stand up right away, he saw my t-shirt.  Check it out at the end of the video.  However you feel about him, it was a very cool moment. 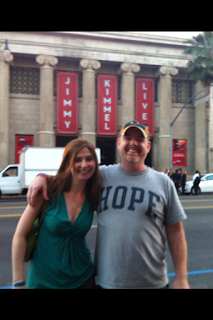 Posted by Dave McGrath at 5:50 PM No comments:

Well, I'm still in recovery from watching Episode VII.  Without sharing any specific spoilers, I will say that a lot of it reminded me of Episode IV, and at times I felt like I was watching a remake of the original New Hope movie.  But, there were elements of both IV and V in VII, and it shouldn't be surprising, because most Star Wars stories have these elements:  The Force, space battles, lightsaber battles, family rivalry, bad guys with a super weapon using fear and the Dark Side, and good guys trying to stop that weapon while using the Light Side.  I loved the portrayal of The Force in this movie, especially considering the lame way it was explained in Episode I. There were also more dark scenes than in any other Star Wars movie, showing what evil looks like when too much power is in the wrong hands. Luckily, humorous lines were placed strategically throughout, and I think the acting brought this movie to a level way past the prequels and close to the originals.  I don't know if Episode VII will make any new Star Wars fans, but it's should please diehards like me, who can't wait to see it again.

Thank you to my cousin and his wife for getting me this t-shirt a few years ago.  They said they saw it, and knew it was perfect for me.

May The Force be with us all. 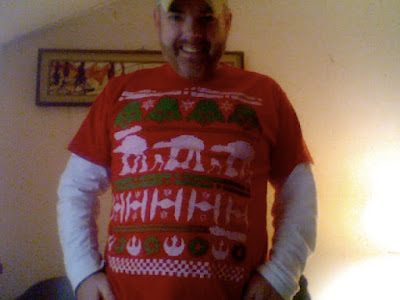 Posted by Dave McGrath at 9:01 PM No comments: 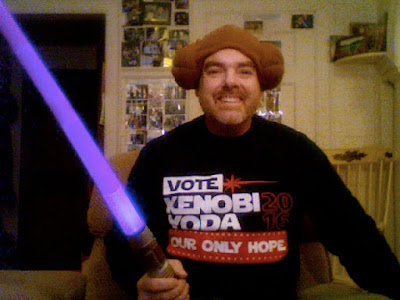 I don't like to get too political with my posts, but Jedi is definitely the party I identify with the most.

Posted by Dave McGrath at 10:51 AM No comments:

T-shirts #4 and #5, 2 for 1: Star Wars Hockey Imperial Conference and Yoda Santa, An Elf I Am Not

Continuing my week of Star Wars t-shirts, these were both given to me as Christmas presents in the last few years.

I wore the hockey one to Buffone today, and will be wearing Yoda at Hope Lodge to most likely give the guests a "Dave is such a Star Wars dork" chuckle.

By the way, Episode VII comes out tomorrow...not that I've been waiting 32 years or anything.

Posted by Dave McGrath at 5:49 PM No comments:

Although I do my best to minimize the times I use the word hate, I definitely keep a list of things on my permanent hate list.
Cancer, Crohn's Disease, War, The Montreal Canadiens, New York Yankees, and Boston University Hockey.
To me these all are different forms and intensities of disease.
The Habs, Yanks, and BU never put me in a hospital, but they definitely gave me times when I didn't feel at ease.
Crohn's Disease doesn't kill as many people as cancer, but it's a lifelong struggle for a lot of people and I wouldn't wish it upon any Canadiens player.
I've never witnessed War firsthand, but from what I've seen and read, I think it's horrific. I see a lot of people, including children, dying over a disagreement.  I understand when someone says they want to take over the world and start invading countries, other countries have to come together and stop that person (say his name is Mitler, for example).  Mitlers must be stopped.  But I don't see anyone saying they want to take over the world.  I've seen my country go into other countries.  According to this article, the US has bases in 800 locations outside the US. Unfortunately, whether or not we are the "good guys" is a matter of opinion.
That's why fighting terrorism or terrorist groups is in some ways more difficult and less clear cut than it was when the US helped to stop Hitler (and the Axis powers) in World War II.  Anyone who believes in the ideology of ISIS will see the US as an enemy regardless of what country they were born in or currently reside in.  I'm American and have enjoyed the privileges of living in the US, but in some ways my heart belongs to Canada (hockey, health care, 78-day political campaigns). Above all, I think what 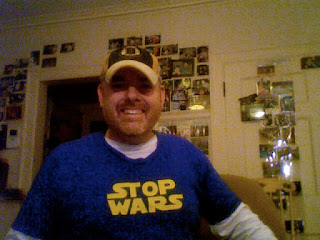 you are taught will have the most influence on what you believe in.  I was raised Catholic, but my parents taught me to judge people on how they behave, and not their religious, ethnic, or any other kind of background.  They instilled an appreciation of Irish music and culture in me, but never said Irish people were any better than any other group, or said I should hate Protestants because of things that happened in Ireland.  The never said I couldn't be friends with someone because of their religion or skin color.
I know many people think it's impossible, but John Lennon was right.  War is over, if you want it. If enough people believe in it and want it, War can be over.
Every major religion in the world has a version of the Golden Rule: Treat others as you would like to be treated (see my Coexist T-shirt blog).  If everyone took that teaching of their religion to heart, it could overcome all of the other quotes, teachings, and ideas that people feel the need to kill and die for. To many it may seemed far-fetched, but I believe it's possible.
This t-shirt is one of my favorites because it's an idea that I believe in, and also based on my favorite movies.  It's a new one, but replaced the old, worn out one from my t-shirt blog.
So during this Sithmas week, let's enjoy Star Wars, and believe in Stop Wars.

Posted by Dave McGrath at 7:00 PM No comments: 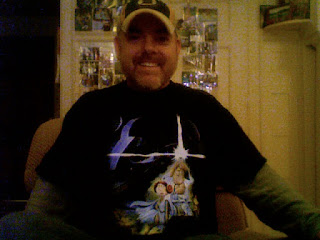 This Star Wars t-shirt is a repeat from my 2010 blog (see post here), and is still available if anyone wants to make a donation to Hope Lodge or Skating for Hope - let me know!

If you've never seen the Family Guy Blue Harvest / Star Wars episode, you can check it out here:

Happy 2nd Day of Sithmas!
Posted by Dave McGrath at 4:28 PM No comments: